Yusaku Maezawa, renowned musician and owner of the fashion company ZOZO, will be the first passenger of the SpaceX Big Falcon Rocket, traveling to the moon and back.

It was announced on Sept. 17 at SpaceX headquarters near Los Angeles that Maezawa, a Japanese entrepreneur, bought seats for himself and potentially six to eight other people from around the world. Not just any people, but artists.

Yusaku, 42, said during the conference that he wants to choose artists from all around the world, such as photographers, architects, or film directors, to come with him on the journey to convey the moon through their forms of art. His goal is to inspire a new generation of imagination and hope for the future.

“I thought about how I could give to the world,” said Yusaka, “and how this could contribute to world peace.” He said he believes that art itself can promote world peace. “This is my lifelong dream,” Maezawa said.

The journey will take four to five days. The rocket would not be ready for the trip until 2023, Mr. Musk said, and would cost from $2 billion to $10 billion to develop. He added that Maezawa’s ticket price will make a meaningful contribution to the project’s completion.

Not only was the first private passenger for the BFR announced, but new details of the rocket itself were shown.

The most distinguishable changes are the fins near the back of the upper stage of the rocket, the Big Falcon Ship. Originally, the BFS almost had an appearance similar to the Space Shuttle (R.I.P.) with flat wings at the back, but now it has three fins at the back, two actuated and one static. It’s a much more classic design, and even Musk himself during the conference said that it had a “tin tin” appearance to it.

Other than the main fins added to the back, there are two more actuated fins added to the front of the rocket, almost giving it a squid-like appearance. Near the front-top of the BFS, the main windows have been changed as well. Instead of two wide windows, one large, beautiful display window sits in its place.

The last and one of the most important changes are the engines. Instead of four engines for the BFS, there are now seven. And as for the first stage of BFR, it still maintains the 31 Raptor engines.

Not many other details were revealed, but we did learn a bit more about the thrust and payload. Each Raptor engine is able to exert 200 tons of thrust, equaling 1,964 Kilonewtons, meaning the first stage will exert 60.8 Meganewtons of thrust. That’s a whole 8.1 MN more than the previous design, but the payoff is a whole 50 tons less of payload. Seeing it drop this low is unfortunate, but 100 tons is still a lot when the BFR will have full reusability.

The BFR is expected to do its first hopper test flight next year. As the years crawl on, the closer the BFR is to becoming a reality, and to being the rocket that brings humanity back to the Moon, further to Mars, and beyond. 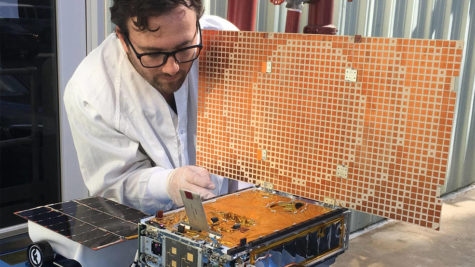 After launching earlier this summer, NASA’s two CubeSats — miniature, modular spacecraft — are finally halfway through their trip to Mars, following close behind the Mars InSight lander, to test the capabilities of such small satellites.

These satellites, which are four-inch cubes, are comparable in size to the very first satellites such as Explorer 1 deployed in 1958. They are often not the satellites scientists use, instead favoring those the size of cars or bigger due to their being able to hold more scientific instruments.

But as advancements in technology allow phones and computers to get smaller, some scientists at NASA’s Jet Propulsion Laboratory want to move in the same direction. The director of the Solar System Exploration Directorate at JPL says that using MarCO could be a big step toward downsizing future satellites: “The technology is cheap enough that you could envision countries entering space that weren’t players in the past.”

The two satellites, MarCO-A and B, only have a few instruments on board. On the top of the CubeSats, each one has various devices such as flight computers and IRIS radios while on the bottoms they have tablet-sized radiators and color cameras for taking pictures of the red planet. Each CubeSat has a solar array on each side of it, both nearly the size of the tiny satellite itself, and one large orange reflectionary antenna that is probably the most captivating thing about the satellite.

If MarCO-A and B can successfully reach Mars and perform their surveillance, engineers will be more compelled to possibly downsize future satellites, which would significantly lower the cost, allowing such engineers to attempt many more risky designs and technologies in space. 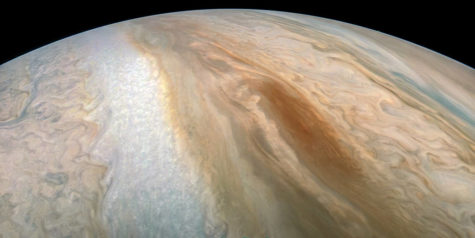 NASA’s Juno spacecraft caught a unique image of Jupiter on Sept. 6, with a large brown spot, otherwise known as a brown barge.

Brown barges themselves are very hard to spot, due to their dark color in an already dark environment, leading them to blend into its surrounding environment. They are typically near the Southern Equatorial Belt and are vast cyclone regions that usually dissipate after a short while.

However, Juno did its 15th close flyby of the gas giant, revealing that this barge has been there longer than the usual Barge, and seems like it will stay for a while longer.