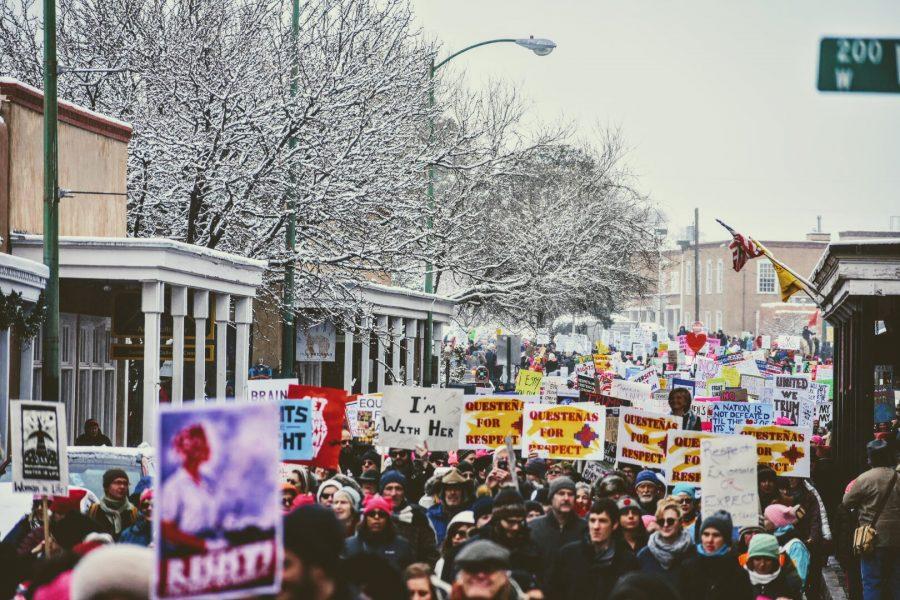 The Women’s March: History in the Making?

It’s a chilly January afternoon in Santa Fe, but the wind and snow don’t seem to reach me through the thousands of collected women, men and children who have gathered to march in solidarity.

A woman behind me sings “This Land Is Our Land” while a man to my right taps a beat on a Native drum. Signs about reproductive rights, climate change and newly inaugurated President Trump surf the crowd, bobbing as we round the plaza.

Santa Fe was not the only march to exceed its projected numbers. Major marches, such as those in New York and Washington, D.C., saw over four times the projected numbers, according to the New York Times. The Atlantic magazine’s reported that approximately 550 U.S. cities and more than 100 cities worldwide hosted marches, from Australia to London. Even in Antarctica, an expedition group of approximately 30 people marched.

But what was the purpose of these marches?

The website for the Women’s March on Washington states that their mission is to “stand together in solidarity with our partners and children for the protection of our rights, our safety, our health, and our families — recognizing that our vibrant and diverse communities are the strength of our country.”

Though organizers claim the marches weren’t intended to focus on Trump’s policies and agenda, the majority of protest signs reflected worry and frustration about our new president. The president’s Twitter response was, “Watched protests yesterday but was under the impression that we just had an election! Why didn’t these people vote? Celebs hurt cause badly.”

The idea that those who took the time to gather and protest could be accused of not voting is ridiculous, as is the opposition to the marches. After all, protesting is part of our nation’s history.

According to History.com and U.S. History.com, protests and marches within the Civil Rights Movement of the 1960s resulted in desegregation, an increase in voting rights, and an effort to end discrimination in general. Other movements such as the Vietnam War protests are also credited with bringing political change.

While these historic movements produced results, questions on what comes next are being posed.

Political theorists at the Washington Post believe that the answers lie in organization. They propose that without clear leaders, groups, and follow-up actions, the movement will see little to no results. In response, the movement’s initial organizers have begun to meet with groups such as Planned Parenthood and to convene rallies to plan the next steps.

The New York Times reports that during these rallies, multiple interests groups, including National Domestic Workers Alliance and Retake Our Democracy, urged marchers to support their organizations. Event organizers and speakers such as Terran Lovewave, leader of the Santa Fe Women’s March on Washington, also addressed the necessity of political involvement, proposing that citizens reach out to congressional representatives and state legislatures to express their views on future executive orders and federal bills.

These follow-up actions are still occurring and are attracting the support of a diverse crowd, a fact that surprised many.

According to National Public Radio, nearly every march featured a mix of genders, races, sexualities, religions and ages. However, NPR also noted some tension, including racial tension, among marchers who disagreed on the main agenda for the movement. Even one of the marches organizers, Linda Sarsour, saw this tension first hand when her Muslim background was targeted and compared to radical terrorism. On the other side of the argument, some found the organizers themselves to be less than diverse though it seems as if this issue was quickly resolved.

Also, while a majority of protesters showed pro-choice ideals, there was also a number of pro-life feminists. Similarly, NPR found that some who marched in support of racial and LGBTQIA equality experienced opposition. While these tensions were not widespread, they must be addressed as the movement plans further action.

While I believe that one of the beauties of protests is the presence of diverse opinions, unification is still needed, though not necessarily total agreement. In fact, I believe one of the aspects that made the Women’s March unique was the mix of motivations that still somehow connected in overall support of women’s rights. We need a balance of diversity and solidarity to succeed.

Many marchers showed an interest in the movement’s future. One sign even read, “This is only the beginning.”

This begins a diverse and non-violent mission. The Woman’s March on Washington says their next course of action is the campaign “10 Actions for the First 100 Days.” More information on this campaign, as well as youth organizations and future activities, can be found at www.womensmarch.com.

While there are still questions and issues arising, the unity felt during the marches still resonates with those who were present and even those who weren’t.

So what’s next? As I look around and take in the overwhelming number of people around me, a little girl runs by with a sign that reads “The Future is Female” and I can’t help but think what’s next is the beginning of history and change.