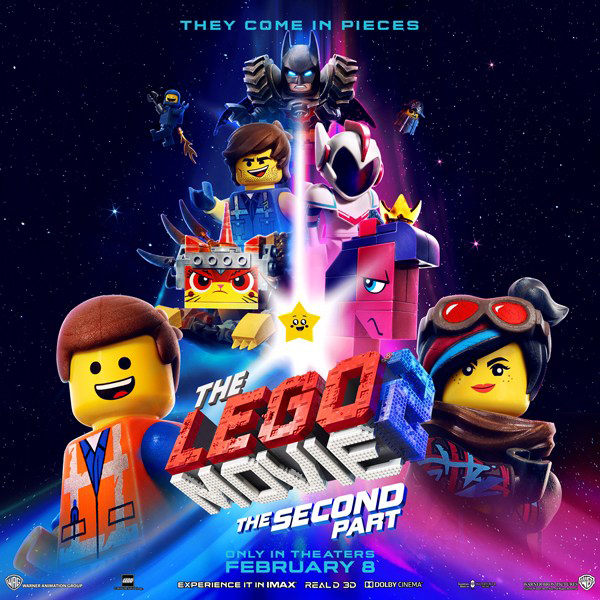 Legos, having been around for almost 90 years now, are without a shadow of a doubt the most influential toy to have ever been made. These simple bricks, accompanied by their minifigures, have shaped the childhoods of many people, everywhere, including me.

The first Lego movie, which was released in 2014, is about a boy trying to insert his creative Lego creations into his father’s city dioramas. It was a great family movie about the joy that the toys brought. The Lego Movie 2: The Second Part follows this theme as well.

The sequel picks up right where the first movie ends, when the son, Finn, is allowed to play in his father’s diorama. He has to deal with his younger sister, too, a situation many of us had to deal with as a kid: letting siblings in on the fun.

The film takes place five years after the first, with Finn having taken over the city diorama with his own personal post-apocalyptic Mad Max style world. The movie not only focuses on the subject of having to get along with siblings, but also growing up.

The Lego Movie 2 focuses less on the side characters and more of the conflict with Emmet, the main Lego character, and with his having to grow up and act like an adult. This is something that anyone watching this movie can relate to, and what keeps this sequel from being just another sequel. It makes this story about Legos — filled with plenty of amusing jokes, a touch too many musical cues, and quite a few heartfelt moments — feel like a real story. I found this to be much more emotional than the first Lego movie, mainly due to how nostalgic it made me feel. The movie made me feel like the 12-year old I was when I saw the first Lego movie.

The other big improvement this movie has over the first is the visuals. For a movie where 99 percent of the time all you see is Legos on screen, it is one of the most visually impressive movies I’ve ever seen, even more so than the first. Just like the first movie, it is primarily CGI, not actually stop motion, but the CGI itself is amazing enough to make me forget that those really aren’t actual bricks on the screen.

The music still holds up to the first, with a few new songs to accompany the remixes of  “Everything is Awesome.” It may get a little repetitive for the older audience, with plenty of parody pop songs that are meant to get stuck in your head, but it doesn’t cross the line into annoying.

Everything needed to make this feel like a proper sequel to The Lego Movie is here, and it does not fall into the pile of bad sequels. It handles the themes of growing up and getting along with siblings well, or at least that’s what my nostalgia is making me say, since I also had to deal with sharing my Legos with my younger brother when I was a kid. I was even sad when the movie ended, after remembering all of those Legos that I have lying around in boxes and containers.

This movie does a great job of reminding you about the great things that Lego has done for countless kids, and it makes you want to relive the experience of playing with your favorite bricks again — even with your siblings.