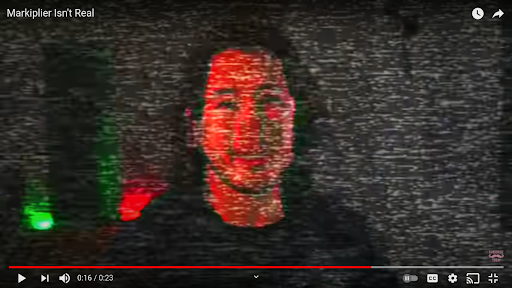 Mark Fischbach, aka Markiplier, is a Youtuber who enjoys playing video games, making content “reviewing” food items, streaming with friends on Twitch, and creating Lore-induced mini-series with his different personalities, and most recently a mini-series called, “#Markiplierisntreal,” involving confessions of Mark’s friends and Markiplier’s editors.

Beginning on January 4, 2021, in a video titled, “Markiplier Isn’t Real,” Mark discusses taking the week off of filming and releasing content to have a writing week for a product that will be released sometime in 2021, recently revealed as the sequel to, “A Heist with Markiplier.” He ends the video with “…that’s okay because I was actually never real, to begin with,” followed, again, by glitching, a depicted Youtube notification that the video doesn’t exist, and the hashtag #Markiplierisntreal glitching in and then out.

In the following week of this video, a video was released daily by three of Mark’s editors, Lixian, Marcus, and Rachel of their confessions about Markiplier not being real. They go on to say how when they receive footage and audio from Mark it is often corrupted and the actions of Markiplier are ‘off’.

Following the editors’ confessions, Wade and Bob, two of Mark’s friends who are often playing online games with Markiplier and have their own streaming channels. The videos they release offer the conclusion that Markiplier is indeed real although Markiplier said himself that he isn’t real. The two often react throughout their confessions as though they are being tied down and are reading from a script, Wade even mentions at the end of the video, “Can I go now? Please let me go.”

Once the four confessions were released, Markiplier released a video saying, “Hi, I am real after all. You’ve solved the mystery.”

After this series of seven videos, the channel seemingly went back to normal with two compilation videos and a let’s play video of a game called “Golf Around,” with the two friends, Wade and Bob, that was cut from a twitch stream done on December 22, 2020.

Markiplier’s Youtube channel began in 2012 and about 2 years after, the creation of Wilford Warfstache was born. He first appeared in the video, “The Fall of Slender Man,” and since he has been the most well-known character in the channel; you can even see the iconic pink mustache pictured in Markiplier’s channel picture.

From November 15, 2019, to November 14, 2020, Mark and Ethan Nestor, aka CrankGamePlays another gaming Youtuber, created a channel known as Unus Annus (oohnus ahhnus). Ethan was the character Unus and Mark was the character known as Annus. The channel was centered on the idea of not taking life for granted because death is coming; the timer is ticking; the motto that was often mentioned was, “Memento Mori,” remember death. Unus Annus lasted only a year, after all the name does mean, “One Year,”, and was deleted 365 days later with the alter-egos, although it was created during a leap year.

Wilford Warstache has been seen throughout the years on Markiplier’s channel in different short stories creating Lore and suspicion in the series’. Unus Annus began having glitched codes in the videos that people in the fandom began to decipher and created many conspiracies around the channel’ many being a simulation, or not deleting the channel as promised, these were proven incorrect by the two alter-egos.

Markiplier has many other alternative personalities including, Darkiplier, Dr. Iplier, and Santa Claus.

Fans of Markiplier started creating conspiracy theories about the mini-series. There was a lot of speculation online with people thinking and connecting the confessions with the deletion of Unus Annus. Some people have also dug through older content of Markiplier and Unus Annus archive channels with one video titled, “ Are Reptilian Humanoids Living Among Us?” A lot of conspiracies made by fans are leaning towards the idea of Markiplier being a reptilian.

What do you think? What could be going on with the iconic Youtuber? Is he a reptilian or is it something bigger?