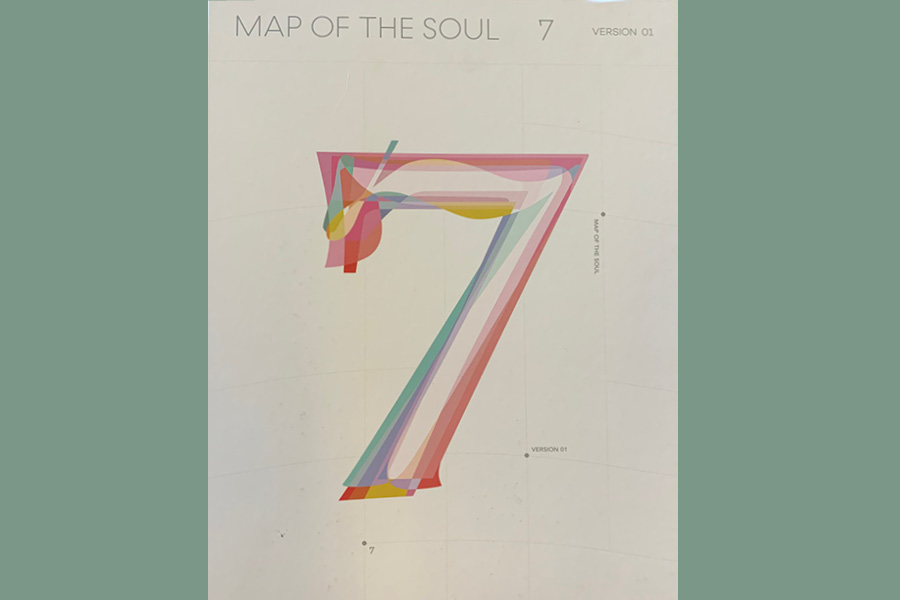 The South Korean K-Pop boy group BTS continues to fuel the growing K-Pop phenomena in America. The release of their new album Map of the Soul: 7 on Feb. 21 concludes not only their Map of the Soul series, but could very well be the last album the group releases together.

This new album followed the seven-song EP Map of the Soul: Persona back in April 2019. The 20-track album contains five songs from the previous EP, only excluding “Mikrokosmos” and “HOME.” In addition, each of the seven members has their own solo, and a few different lines of members have their own tracks as well. In total, the full group only has seven songs on the album in which they all appear.

The group’s hit collaboration with Halsey from 2019, “Boy With Luv,” is featured on the album along with hit songs “Black Swan” and “ON,” including a remix of “ON” featuring Sia as the last track of the album.

The word “7” in the title has two meanings: It’s been seven years since their debut in 2013, and it also stands for each of the seven members of the group.

Many believe this could be the last album the group releases with all seven members since the oldest member, Jin, will have to report for mandatory military service within the next year.

Although Jin is still 27 years old in international (western) age, he is already 29 in the Korean age system, since in Korea, you “age” a year every New Year rather than on your birthday. This means he has already been conscripted and will be ready to serve whenever called. While Jin will surely be the first of the group to enter the military, the next up will likely be two of the group’s rappers, Suga and J-Hope. So by the end of 2021, BTS could look a lot different from today.

Many Armys (BTS fans) were hoping that South Korea would grant the members an exemption from military service, and while at first it looked promising, the government made it clear that “pop stars” would not be exempted. The only groups of people that are granted exemption are athletes and various kinds of artists (excluding K-Pop stars), such as star soccer player Son Heung Min, who plays abroad in the English Premier League.

Over the past ten years, 280 artists and 178 athletes have been exempted from military service in South Korea, according to hollywoodreporter.com, in an article about BTS’ denied exemption.

Despite the group having to disband, perhaps temporarily, many other male K-Pop groups have survived through it, such as SUPER JUNIOR, NU’EST and SHINee, who are still together with some members almost in their 40s. Given this, BTS, being not only the biggest K-Pop group but the biggest boy band in the world, shouldn’t have much reason to worry about the group disbanding.

While only time will tell if BTS will remain the same throughout the next couple of years, their influence on Korean culture and bringing the K-Pop trend over to America has not only affected many young fans, but it has paved the way for other K-Pop groups to follow their example.